When it’s summer and there are holidays, I go to my grandparents. They have got a cat named Lila. She is very lazy cat, when she sees mice she looks at it and falls asleep. Lila is a big fat cat with brown big eyes and big grey ears. When she doesn’t get attention, then is very angry. She just wants to sleep.

Lila loves to spend time in the house in the living room. Actually, my grandmother doesn’t let her in. She can only be in the dining room, kitchen and in my room. There are all her toys. She can run very fast and jump high. I spend my free time with her and she loves spending time with me. She sleeps in the hallway but when I’m there she sleeps near me. She doesn’t eat much but is still very fat. The food that my grandparents buy her doesn’t cost too much but she loves it. My cat doesn’t need to much space. I look after her when my grandparents are not home.

My favourite school friend is Zana.

She is twelve years old like me. Her birthday is on the 7th of May. She has got two sisters. They are both older than her.

She likes running. She has beautiful blond long hair always in a ponytail. She has big brown eyes and a small nose with freckles.

She is taller than me. She trains basketball and she is very good at it.

I love Zana because she is the kindest and loveliest person I have ever met. She is the one who makes me laugh when there are hard times. I love Zana she is my best friend.

In winter you can go skiing to Trije kralji. In summer you can swim in a swimming pool and walk in Vintgar.

I would like to know three things about your city. How many people live in your city? What can you do in summer and winter? Do you like your city?

Hope to hear from you soon. 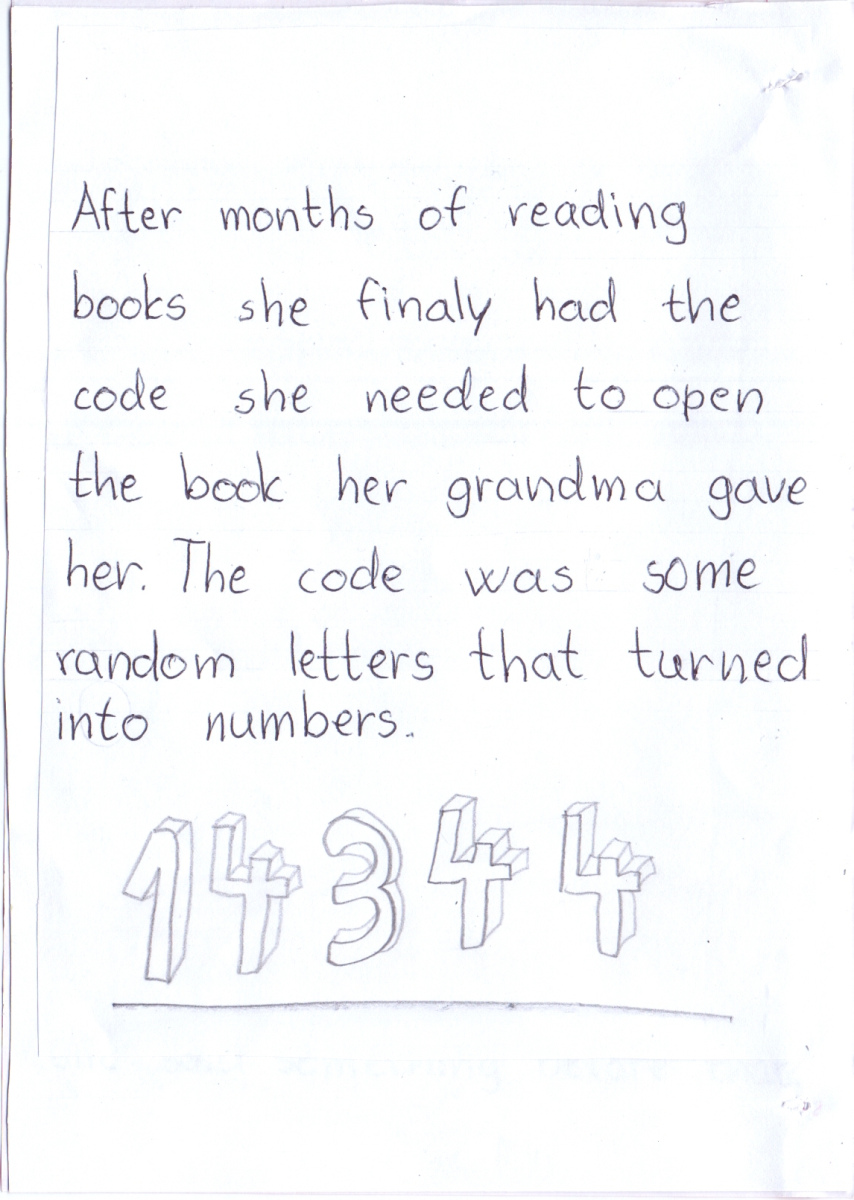 It was the year 2003. At the time I was 16 years old. Now I’m 35 years old. I lived with my grandfather. Me and my grandfather John lived in the Swiss Alps. John would always tell me not to go in the old shed. The old shed was an old,  wodden, broken down building. It was about 20 kilometers away from John´s cottage. But my curiousity got the best of me. I went across  wooden old bridge. Seconds after I stept on the other side of the bridge, it was destroyed. I went in the old shed anyway. On the floor there was a trapdoor. It lead to the basement. The basement looked like it was build yesterday. I peeked around the corner and saw an old man sleeping. He woke up and I saw he had a gun. I run in the forest nearby. He chased after me. I was able to escape and when I was walking, I saw a scared young girl. We started a campfire and four hours later we found a village. They called themself Whispers. We had got a warm welcome. They gave us food, water, blankets and shelter. Days later John was looking for me as it was written in the newspaper. They gave me a phone to call John. A tip, don’t go live in Swiss Alps as there is NO signal! Then I have asked the villagers, if they know the way to John’s cottage. They said it was south from where we were now. I went south with the litlle girl.« We finaly made it!« we screamed. John was happy, but sad, because before he had one child to watch out for, and now he has two.